Officer Andy, A Bike for Cristian, and Herbs Across the Alley

HomeUncategorizedOfficer Andy, A Bike for Cristian, and Herbs...

Officer Andy
A few days into my new bike commute 13th street, I started noticing there was every morning a DC police cruiser with its lights flashing in the same spot next to the Fort Stevens Community Garden. The next day, I saw that there were at least five cruisers parked in the neighborhood, all with their lights on and officers sitting in the vehicle. No activity, just sitting there.
Aside from the easy conclusion that community gardens might soon be the most important monument in DC, I was curious as to why so much police presence on one block when they certainly must have better things to do during a pandemic.
I pedaled up to the cruiser “guarding” the community garden and said good morning to the officer. A slightly chubby, mid-40’s white guy named Andy, he looked like your typical beat cop from central casting.
We started to chat. Turns out there recently was a triple homicide in the projects next to the community garden and the police were trying to suppress any retaliatory activity. Officer Andy said that there were actually 7 cruisers stationed in the surrounding blocks. I can’t imagine how much it costs to keep seven police stationed 24/7 as guards but obviously someone thinks it’s worth the effort.
Officer Andy pointed at my Backyard Bounty sweatshirt and asked what kind of work we did. As soon as I told we were an organic gardening company, he started peppering me with questions about where to find seeds, the best kind of compost, etc. Turns out he has his own community garden plot in the Palisades and is starting a victory garden in response to Covid-19. He gets one day off a week and always spends part of it at the plot.
I asked him about how the current situation is affecting Metro PD. He told me about the extra overtime, the daily fever tests that he thinks inadequate, and the repositioning of officers to different parts of the District. He finished by saying, “It’s not so bad now, but in the next couple weeks…” At that moment, another cruiser came zipping around the corner and pulled up next to us. The driver starting yelling questions at Officer Andy. I started to back away to let them work but Andy held up his hand for me to pause. Andy yelled something back at the other driver who then sped away. He then turned to me and said, “I have no idea how that woman became a police officer.”
I thanked him for his work and got back on my bike. For the next few days, I waved to Andy every morning as I passed. He waived back each time.
Yesterday morning, he was gone and I could only see two cruisers on the block. Not sure where Officer Andy went next but, as much as self-pity as I might generate for my current situation of stress and worry and 14-hour days, I can’t imagine what the people on the front lines are going to face over the coming weeks and months. 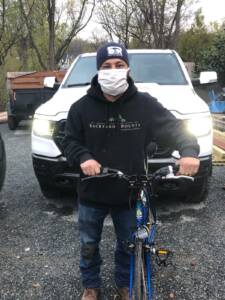 A bike for Cristian

Thank you, Richard and the others who have contacted me off-list.

Thanks to the generosity of this neighborhood, within one hour, all my team members who don’t own cars now have access to a bicycle. We arranged for safe transportation to/from work a couple weeks ago but now they have a non-bus option on the weekends and after-hours for getting to the store, etc. Backyard Bounty will take care of the helmets and locks.
All four team members are recently-arrived refugees who came to us through the International Rescue Committee so your gesture means a lot to people who have had a very difficult time over the last few years and are now trying to build a new life in the US under obviously challenging circumstances. IRC is doing fabulous work here in Silver Spring if you’re for more ways to help.
Kris
On Mon, Apr 6, 2020 at 6:34 AM Richard wrote:

We have a team member who is trying to avoid the bus but doesn’t have a car. Does someone have a bike they could loan to him for an extended period of time? I gave away all our kids’ bikes last year.
thx~
Kris

Herbs across the alley
It’s a beautiful April afternoon in Adams Morgan DC and I am sitting in the courtyard of our apartment furiously typing emails to our vendors and clients to keep our landscaping business up and running.
Across the alley and up three stories, I hear some guy talking (loudly) on his phone while tending the plant containers on his balcony in the same building as our new favorite restaurant, Reveler’s Hour. I can’t hear everything but the words “parsley” and “thyme” come through clearly. Normally, I would wish he’d just shut up and let me work in peace. Instead, I wave at him and ask if I can take his picture because Backyard Bounty is collecting stories about how gardens are helping people through this awful time.
We start chatting (more like yelling) at the very safe social distance of ~100 feet. He asks about the best way to grow herbs on his north-facing balcony (the answer is he really can’t) and where he can get more ideas (the answer is on our blog). We are now trading emails about good plants for shady containers. Jim seems like a nice guy and I hope we can help him.
This is a connection I never would have made during “normal times” and the kind of thing we need to do more of if we’re going to come out stronger on the other side.
Be safe, take care of those around you, and go out in your garden.